As a boy, Bagieng Keophimphone watched his father suffer several strokes and struggle to find a Laotian physician for health care.

That influenced Keophimphone’s path to Fresno State and his determination to someday serve the community as a doctor. The first-generation college graduate earned a bachelor’s degree in biochemistry as well as the University’s highest academic honor — the President’s Medal.

“I was caught by surprise, but I was very happy,” says Keophimphone, who was recognized for academic excellence along with his work ethic, kindness and character.

Fresno State’s eight schools and colleges, along with the Division of Student Affairs and Enrollment Management, each selected an outstanding student to honor as its Undergraduate Dean’s Medalist based on academic excellence, community involvement and other achievements.

One medalist from the group is named the President’s Medalist, the University’s top academic honor for an undergraduate student. Keophimphone was notified of the honor during a Zoom call from University President Joseph I. Castro and Provost Saúl Jiménez-Sandoval on May 15.

Christopher Meyer, dean of the College of Science and Mathematics, said in a nomination letter that Keophimphone’s “prioritization of his family and community over his own goals is a remarkable testament to his character and values. The health professions need more individuals of his talent level and dedication.”

Professors also spoke of Keophimphone’s commitment to academics and others at the University and beyond.

“During Bagieng’s career at Fresno State we can see his positive influence everywhere: in the research lab, in the classroom, in student life and in the community,” said Alam Hasson, associate dean and professor of chemistry. “He is a remarkable young man who models the values and excellence that we aspire to as an institution.”

Keophimphone, 22, is the son of Laotian refugees who moved to Fresno before he was born. His parents worked in the fields and the family of six — including him and his three older sisters — lived in a two-bedroom apartment.

Looking back, Keophimphone sees his family’s struggle “but as a kid, [I] didn’t really realize that.” He often helped care for his father, who suffered two strokes before Keophimphone was a teenager.

In high school, Keophimphone gravitated toward science and an interest in medicine. “Chemistry was really hard for me, yet it was satisfying once [I] was able to solve a problem,” he says.

His oldest sister encouraged the idea of higher education. She graduated from Fresno State with a bachelor’s degree in nursing and “used my parents’ struggle as a way to motivate me to go college,” Keophimphone says.

At Fresno State, he immersed himself in the academics and diversity of college life. Throughout his four years, Keophimphone participated in different kinds of outreach and organizations such as the Laotian Student Association, the American Chemical Society at Fresno State, the Health Careers Opportunity Program and the Louis Stokes Alliance for Minority Participation.

“Fresno State is just a wonderful environment,” says Keophimphone, whose GPA is a lofty 3.93. “The Chemistry Department is amazing, the faculty is amazing — they will support you in a heartbeat. They are really passionate about helping students succeed.”

He is awaiting decisions on medical school applications and hopes to enroll this fall. Keophimphone likely will pursue studies outside California and away from his family and father, who suffered a third stroke last year.

That is on Keophimphone’s mind but he is confident his father is in good hands with other family members, including his oldest sister. And medical school is the only avenue to becoming a primary care physician serving the Laotian and Central Valley communities.

“The people who were like me and my family growing up, I just want to be able to help them,” he says. “That’s my goal — to come back and help the Valley.” 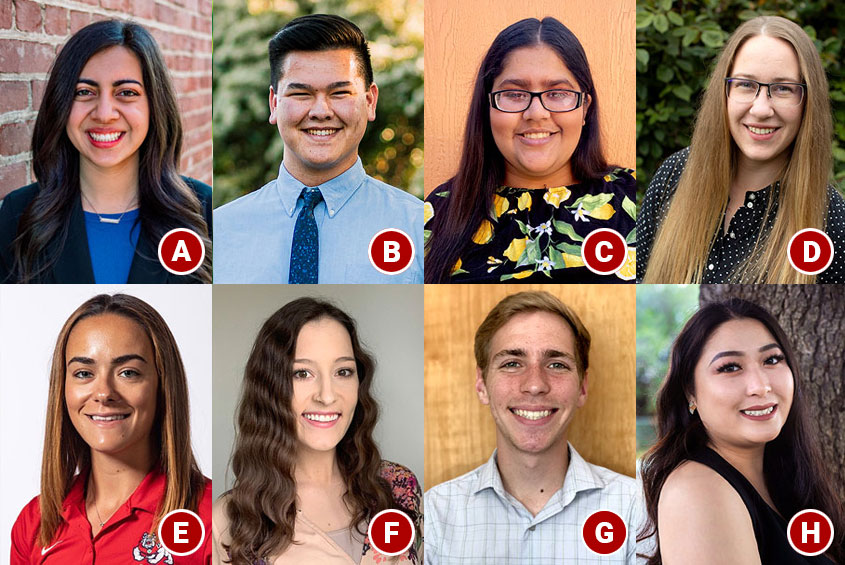 (A) Jezraiah Cabasa
College of Health and Human Services

(B) Greyson Canterbury
College of Arts and Humanities