It’s Cool to be Smart

In six years at Fresno State, Jalen Harris built a resume that opened the door to doctoral studies at an Ivy League university.

He earned bachelors’ degrees in mechanical engineering and mathematics, conducted research focused on solar energy, completed four peer-reviewed journal publications and graduated this spring with a master’s degree in mechanical engineering (and a sterling 4.0 GPA). Along the way, Harris also worked to uplift others as a teaching associate, as a mathematics outreach fellow and as vice president of the National Society of Black Engineers on campus.

Now he’s been honored as the University Graduate Medalist, the highest academic honor for a graduate student. In a nominating letter, Lyles College of Engineering Dean Dr. Ram Nunna praised Harris as a “brilliant student, researcher and instructor.”

“Jalen’s accomplishments as a student at Fresno State will have a lasting impact,” Nunna wrote. “He will likely never know or meet the many young African-American and other students who learn about his successes, right here at Fresno State, and become inspired to be like Jalen. He showed that by hard work, perseverance, dedication and support, success is achievable by anyone.”

Fresno State’s eight schools and colleges, along with the Division of Student Affairs and Enrollment Management, each selected an outstanding student to honor as Graduate Dean’s Medalist based on academic excellence, community involvement and other achievements.

One medalist from the group is named the University Graduate Medalist. Harris was notified of the honor during a Zoom call from University President Joseph I. Castro and Provost Saúl Jiménez-Sandoval on May 15.

For Harris, a first-generation college student, the medal is a shared honor.

“I appreciate all of the opportunities that I was given throughout my time at Fresno State,” he says, pointing partly to his research and professors/mentors. “It definitely wasn’t just myself, it was all of the people that helped me up to this point, and I’m glad all of that got recognized.”

Harris, 23, grew up in Fresno in a family with three generations under one roof. His father, Angrest, worked in engineering and helped spur Harris’ interest in the field.

“He used to bring home computers for me to play around with,” Harris says. “I think that kind of got me started — getting involved in engineering, math and science.”

Though he sometimes wasn’t the best student in high school, Harris applied himself with renewed dedication in his junior and senior years.

“I found some friends that I ended up clicking with,” he says. “I think they kind of contributed to the culture that it was cool to be smart, it was cool to be interested in math and science, and that was an influence on me.”

He felt comfortable at his hometown University. “There are quite a few first-generation students and it’s a very diverse campus,” Harris says. “I think that kind of helps when you … see other people like yourself.”

In addition to his studies, Harris promoted interest in math, science and engineering — especially working to attract more black students to engineering. (In 2018, Nunna says, just 142 African-American students were among the 7,948 who earned bachelor’s engineering degrees in the 23-campus California State University system.)

This fall, Harris heads to Cornell University to pursue a doctorate; he’s already earned a fellowship covering tuition, health insurance and research. Ultimately, he hopes to land a tenure-track position at a top research institution — and would consider a return to the Central Valley.

Harris credits Fresno State for providing the solid foundation for his academic goals.

The acceptance to Cornell — and other prestigious universities such as Princeton and Yale — “speaks a lot to what Fresno State allowed me to accomplish,” Harris says. “It’s a very good community for learning.” 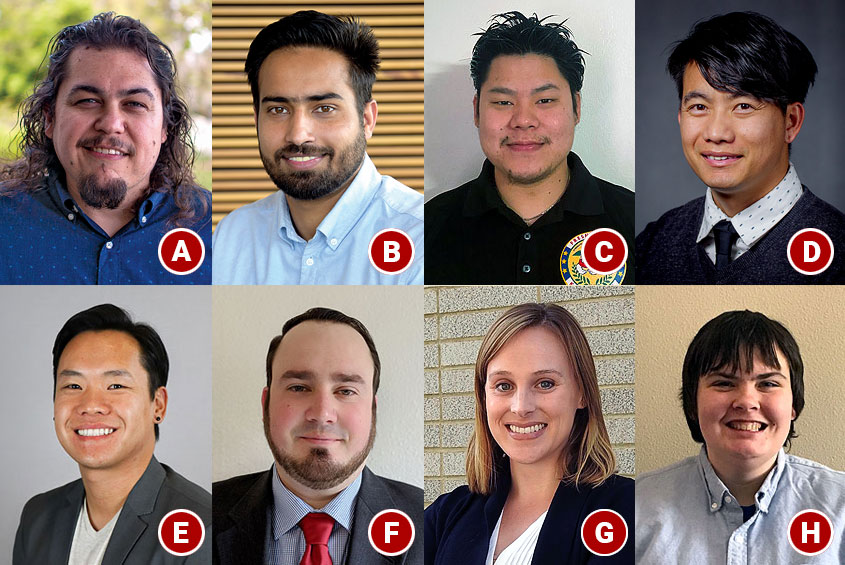 (A) Anthony Cody
College of Arts and Humanities