Just four years removed from rising as high as No. 13 in the national rankings, the Fresno State football program is rebounding from an unheard of 1-11 season. New head coach Jeff Tedford — who played quarterback for the Bulldogs in the early 1980s before later serving as offensive coordinator under coaches Jim Sweeney and Pat Hill — will lead the next chapter of Bulldog football.

Tedford also was head coach at California from 2002 to 2012, becoming the winningest coach in the school’s history and mentoring NFL greats like Aaron Rodgers and Marshawn Lynch. When he was hired at Cal, the Bears were coming off a 1-10 season, and Tedford led the program to a 7-5 record in his first year — the biggest turnaround in the nation that season.

Can he lead a similar turnaround for his alma mater Fresno State in the coming seasons?
Tedford sat down on the red sofa in his on-campus office on the second floor of the Duncan Building to discuss just that and the foundation he has outlined for the program.

What inspired you to come back and be a Bulldog? Having played here, graduating from here, coaching here, I have a true passion for Fresno State and the Valley and the people of this community. When the opportunity came, I felt it was a great fit for me and my family to come back and revitalize the football program because I know it means a lot to a lot of people. And then of course making a difference in the student-athletes’ lives, making sure that we can have them reach their growth and development and full potential in all areas — academically, athletically, socially and spiritually.
This feels like home. It is home.

So it was important to you, seeing what happened in the past couple years with the program to rectify that?

What’s your vision for Bulldog football?

The vision is that we provide a positive experience for the student-athlete. Not all these guys are going to go play pro football, so life skills is first and foremost. To obtain their degree is No. 1, and then that we win games with integrity and class, and we have school spirit and understand who we’re playing for and take pride in that.

Do you talk about how important it is to get that degree?

Absolutely, and I’m a good example of that. I can speak from the heart because I did not do that. I was a junior college player who came here and left and didn’t get my degree and had to come back. So take advantage of the opportunity you have right now to get it done.

So did you get your degree while you were an assistant here?

I was a volunteer assistant and came back and took classes after I played in the Canadian Football League for six years. I came back and helped coach here and didn’t make a dime while I was doing it, at first. I was totally broke. I had a wife and a kid and had zero money. At that point, you realize, ‘Why didn’t I do this while I was here? Why didn’t I focus on academics when I was here?’ So I can speak to them from the heart on that experience and how important it is.

Do you expect to win this year, and should fans expect that?

How do you turn it around?

Some of it has to do with forgetting about the past because we can’t carry that burden with us. You can use some of that as motivation, but I want these kids to look forward. For some of these kids it may be hard to forget about that because it’s not easy to go through a 1-11 season in any way, shape or form. But that’s behind us. It’s all about the future.

What do you want the community to know about how important their support is in getting the program back on track?

Their support is critical. This can be such a tough place to play. Home-field advantage is a big deal in college football with the environment that’s created. It’s as important as anything for our kids to feed off the motivation and the energy level that’s in our stadium. Our fans can play as much of a role in helping us get back on track as anything.

We’ve heard a lot since you were hired about a renewed focus on the community and the call to rally the Valley. To you, what does that mean?

When Fresno State proves itself against big-name schools, is there a chip-on-the-shoulder mentality that makes the community identify with that?

I don’t know if it’s a chip on our shoulder, but I think it is a pride factor to be able to compete with anyone. That’s what I’ve been accustomed to from the time that I was playing here, the time I was coaching here both under Jim Sweeney and Pat Hill and then watching some of the big victories over big programs throughout time. It’s something I think everyone gets juiced about.

How important is it to you to rally the guys from the Sweeney era, the Hill era, the Tim DeRuyter era and make sure they all still feel a part of the program going forward?

It’s critical. There are a lot of people who I knew of and a lot of people I interacted with both as a player and then as a coach, so it’s a broad network. It’s really important for people to understand we are building and bringing back the pride and tradition that all those people understand and know. It’s one of them who’s here doing it and they have a home here. We want them to come back and be a part of it.

It’s important, too, to keep traditions. You brought ‘No ‘Dogs Down’ back from the Sweeney era and ‘Bulldog Born, Bulldog Bred’ has carried on through each coach.

Exactly, like the ‘Bulldog Spirit’ song. To me, Coach Sweeney is the foundation of this place. He’s a legend. He should be in the College Football Hall of Fame. And then Coach Hill did a phenomenal job of continuing that and even growing it. Coach Hill has already talked to our staff. I wanted him to tell us stories about how he did it here and what was important to him in recruiting and everything about the program because he takes a lot of pride in this place.

Who’s the best Bulldog you ever played with?

Oh that would have to be Henry Ellard. He was a guy who obviously had a great NFL career and he was a difference maker for sure. He made my job a lot easier. He was just a tough player, competitive player. As a quarterback, throwing the ball to him and Stephone Paige was awesome.

Who’s the best you’ve ever coached at Fresno State?

Oh shoot. You’ll get me in trouble asking that question. Over the years I coached here we had a lot of success. If you just took a team, the team that beat USC in the Freedom Bowl was loaded with players from Lorenzo Neal and Trent Dilfer to Charlie Jones and Malcolm Seabron, Anthony Daigle, Ron Rivers, Tydus Winans and just so many people. We had a great team. It was no surprise to us to beat USC. I think it was to everybody else, but we were legitimately better than they were.

Is your favorite part of coaching to be on the field with the guys or do you love the recruiting and all the behind-the-scenes stuff?

I love all of it. I had a chance to really reflect a couple years ago when I had my heart issue, and I had to take a leave of absence with the Tampa Bay Buccaneers. It gave me time to reflect as I was recovering from that because I never really had time to reflect before, and so I could ask myself the question, ‘Why am I doing this? What do I want to do?’ And it became so evident to me that it’s college football and being around the kids, recruiting, being with them on and off the field, creating relationships with them that last a lot longer than just while they’re here four or five years. Those are the things that make this profession worthwhile to me.

You were the quarterback the first full year that Bulldog Stadium was open. It’s coming up on 40 years old in 2020, but plans are underway to renovate it. How important is that?

There are some things that need to be renovated for fans. There are plans to get all that done, which will help us big time in recruiting. It’ll help all the other sports as well. When we look at something like that, the revenue-producing piece of it is for everybody, not just for football. It’s important that fans are comfortable there, that it’s safe for fans and that it’s a great place to watch a game.

You’ve been down that ramp as an assistant and as a player, but come Sept. 2 what emotion are you going to feel walking down it as the head coach of the Fresno State Bulldogs?

It’ll be emotional, but it’ll be more energy than anything. I have an obligation to a lot of people, and we have an obligation to the people who came before us. There’s a reason why Coach Sweeney’s picture is right over there (pointing to wall facing his desk next to the doorway). He looks over me every day as I walk out that door. Every time I go down that ramp, it’s the players who were here, the coaches who were here, it’s everyone who has invested in this place is what it’s all about. Going down that ramp for me means a lot. It’s much more than playing a football game.

“Our No. 1 goal is to obtain that degree and get educated, not just stay eligible. We’re thinking about life after football, we’re doing things in the community, we’re networking, we’re building a resume and we’re reaching our full potential in everything we do. The habits we build every day, the work ethics, are going to go much further on after football is over. One of the best things about college athletics is the discipline, the sacrifice, teamwork, dedication, time management, all the things our kids have to do. If they master it here, it’s going to make them a much more productive person in the community.” 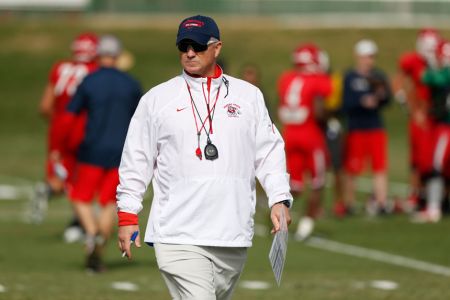 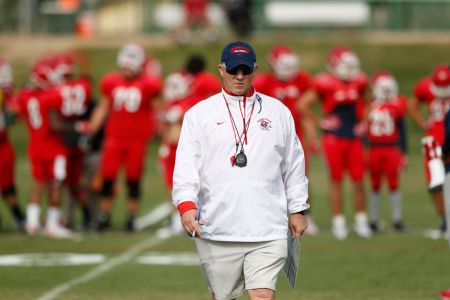 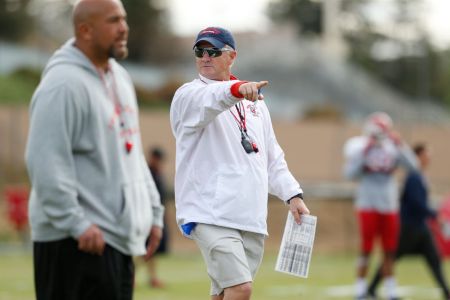 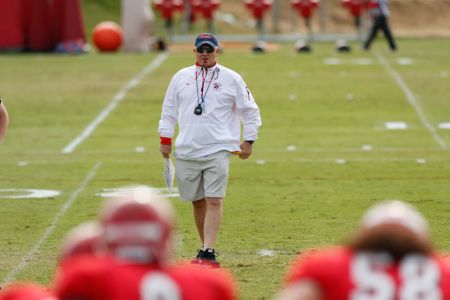 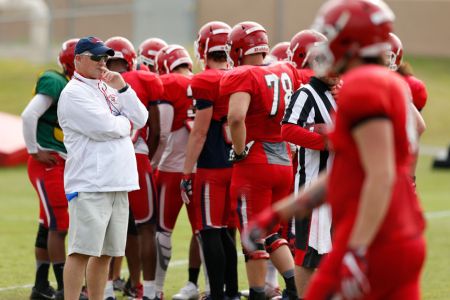 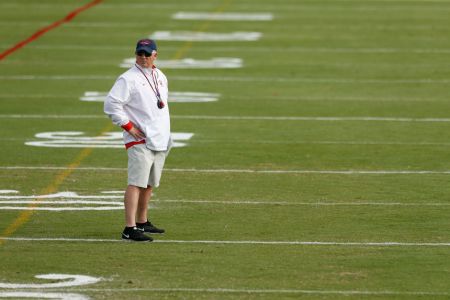 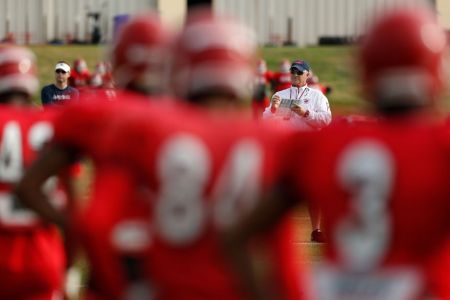 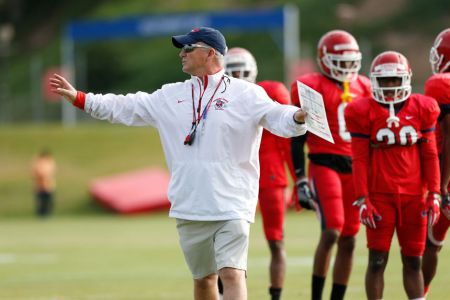 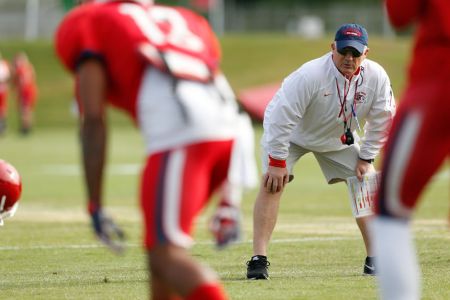 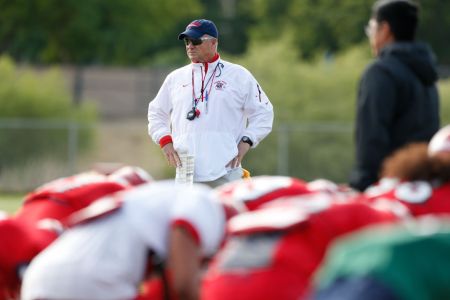