Moving and grooving with the Senior Dog Squad

It’s just before halftime at the Fresno State men’s basketball game against Wyoming. There are more than 8,000 fans in attendance as the Senior Dog Squad prepares for its first performance in the Save Mart Center, and anxiety is high — sweaty palms, racing hearts and tingling legs.

The Senior Dog Squad includes senior citizens ages 80 to 91 who reside at the Terraces at San Joaquin Gardens, a continuing care retirement community in Fresno. Taught by members of the Fresno State spirit squad and coached by Susan Bethel, director of resident services at The Terraces, this team of 16 is reinventing the meaning of senior.

“When you are a senior, it doesn’t mean you need to be in a rocking chair on the front porch or lying in a hospital bed watching TV,” Bethel says.

The squad has performed routines to songs by the Beach Boys, Taylor Swift and Pharrell Williams.

The idea for the Senior Dog Squad came in June when Mike Maiorana, senior account executive for Bulldog Sports Properties, saw a YouTube video of a similar group, Swingin’ Seniors, performing at a Chicago Bulls game. Maiorana then approached The Terraces and proposed a partnership to engage the community.

“I thought, what better way to show the Fresno community what successful aging looks like than to have our seniors get out there and dance right alongside these college students?” says Jessica Lopez, director at The Terraces. “That has really been our goal behind our partnership with Fresno State.”

“The progression I have seen from the first performance in October to now has just been phenomenal and a joy to watch,” Bethel says. “At first the residents felt like these were just cute, young girls who could move and they couldn’t. But now they give them a run for their money, and I have a bunch of hams.”

Practicing for at least one hour per week on their own, members of the Senior Dog Squad learned two different routines.

“Being president of our resident council, I felt like I was kind of obligated to model the importance of getting involved, even though I wasn’t sure if I could physically do it,” says 84-year-young squad member Jean Parret. “But it has just been so exciting, and I just do what I can, but it is all about having fun.”

Morgan Sumner, a sophomore and first-year dancer on the Fresno State spirit squad, volunteered to teach the Senior Dog Squad because she thought it was a great opportunity to work with a different age group.

“We usually target young kids when we teach, but this was really cool because they all sort of became like our grandparents and would give us hugs when we came and asked us how school was going,” Sumner says.

A few of the newer residents at The Terraces joined the Senior Dog Squad to try something new and meet people. Now, Bethel says, “you see them eating dinner together and socializing. It is just so rewarding to watch the camaraderie that has developed.”

Lopez sees this partnership and the Senior Dog Squad continuing in the future. “I think once you’re a Bulldog, you’re a Bulldog for life, and a lot of our residents are alumni, former faculty or they just have a heart for Fresno State,” she says. “So, for me, this is family and this is them showing their pride and their enthusiasm for Fresno.”

Parret says, “The best part for me and a lot of residents was getting acquainted with the spirit squad girls, because I’m a hugger and just can’t wait to see them every time. And I know maybe some of them haven’t had a grandparent in their lives, so it has just been fun making them feel welcome. I guess you can still teach some old ‘Dogs new tricks.”

View the video on YouTube
For more of the Senior Dog Squad interview, visit www.youtube.com/fresnostate 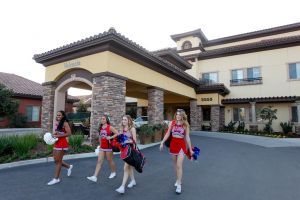 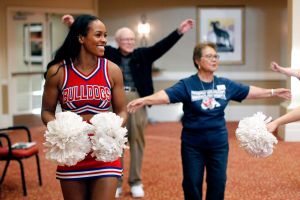 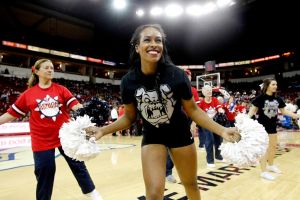 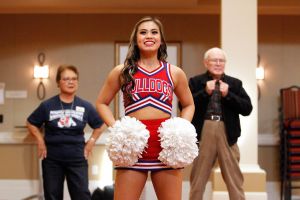 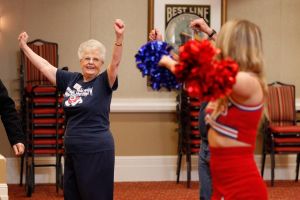 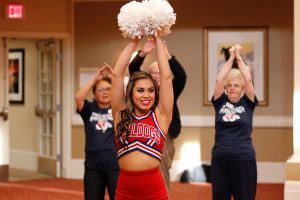 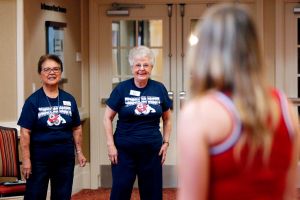 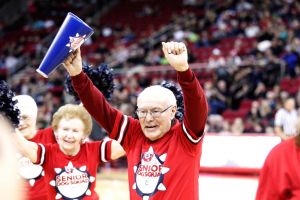 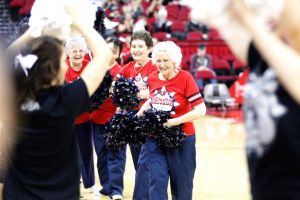 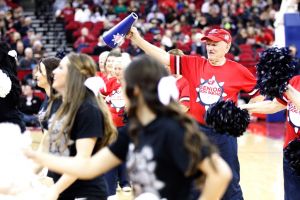 Moving and grooving with the Senior Dog Squad 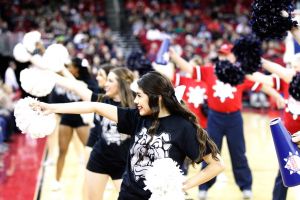 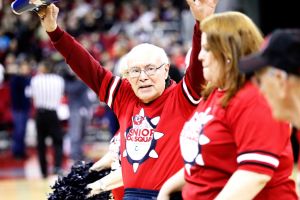 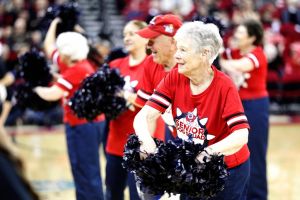 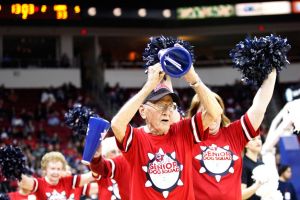