Skip to content
A Century of the Red Wave Rising

A CENTURY OF THE RED WAVE RISING

It all started with an extraordinary vision. A community of hardworking people thirsty for an identity latched on to a growing University. As the student body grew, the fan base grew along with it.

These Bulldogs brought a sense of pride this humble Valley had never before seen. An energy so infectious
that everyone wanted to be a part of it. The Red Wave was born.

Fueled by Bulldog spirit, inspired by legends and uniting us all like nothing else can, athletics became the front porch that introduced thousands to the University.

It wasn’t an overnight success. It took years — decades even — to nurture and mature. Like the crops of our fertile Valley, seeds were nurtured into a fruitful harvest. While the bar was being raised for Dutch Warmerdam’s world-record pole vaults, so too was the bar for what’s possible within the “sleeping giant” that is Fresno State athletics.

And that story is still evolving. This year, we celebrate 100 years of Fresno State athletics. But our story is far from over, and now is not the time to rest. With continued bold thinking and an entire Valley of support, there’s no telling what is yet to come.

Here are 100 moments and milestones that have helped shape Fresno State athletics in its first 100 years: 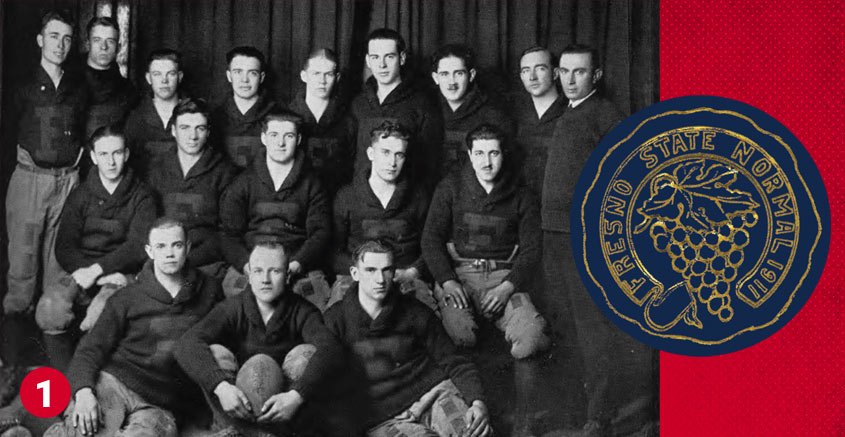 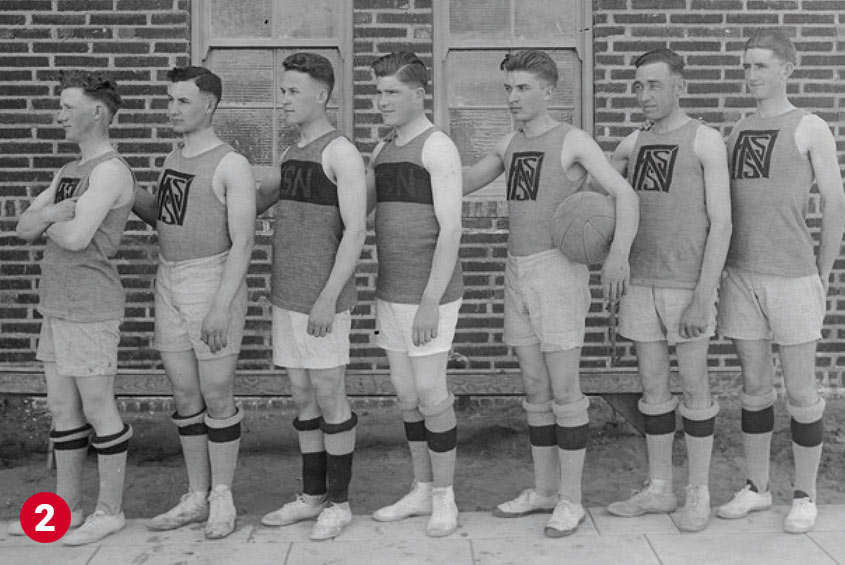 2 – The Bulldogs football team (pictured above) began competition. Led by coach Arthur W. Jones, the Bulldogs finished with a record of 2-4.

3 – The Bulldogs men’s basketball team began competition, finishing with a record of 6-5.

4 – Student body president Warren Moody and friends were continually greeted on campus by a white bulldog. Soon students were bringing the nameless pooch to football games. Arids Walker made the motion to adopt the nickname in a student body meeting. On Nov. 21, the Morning Republican first referred to Fresno State as the Bulldogs. 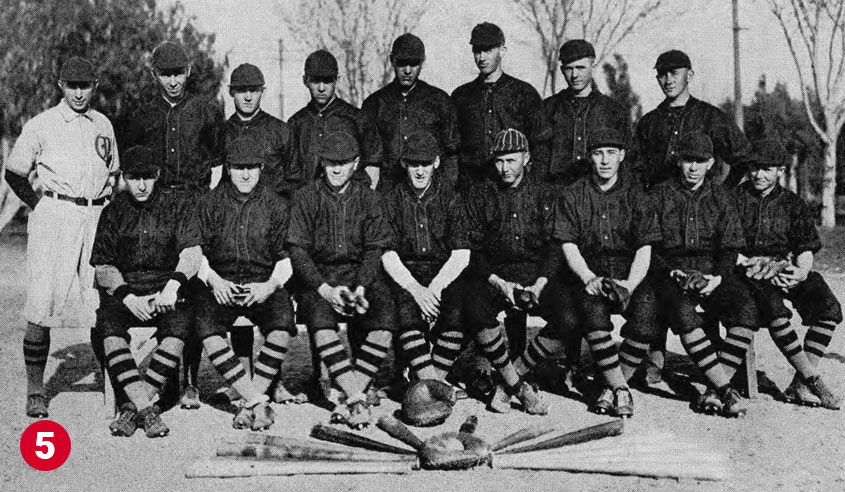 6 – Fresno State Stadium, now known as Ratcliffe Stadium, was dedicated on Oct. 9 on the campus

of what is now Fresno City College.

7 – Hurdler Charles Kaster set a West Coast Relays record in the college class, finishing with a time of 14.5 seconds.

10 – Fresno State’s first live mascot, a white purebred bulldog, was introduced to fans under the name, “Touchdown” (pictured below). 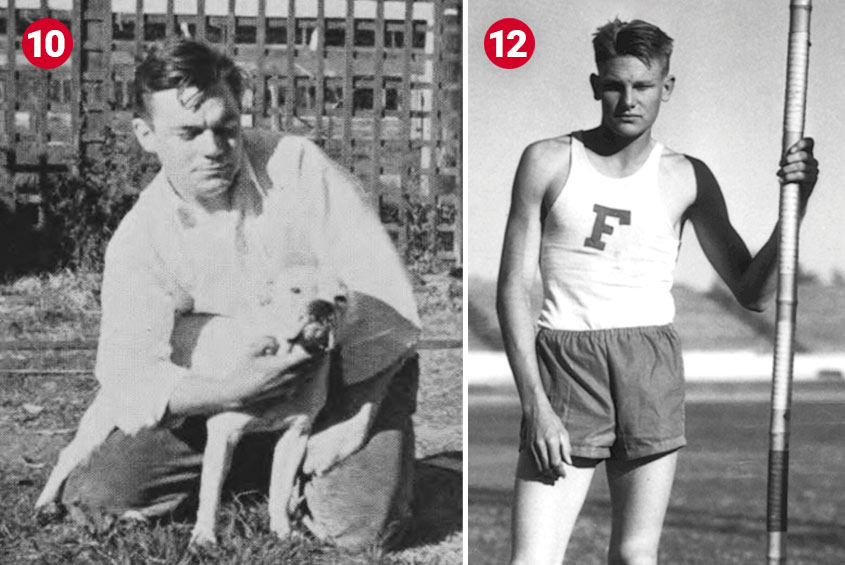 12 – Few, if any, athletes have ever dominated an event like Cornelius “Dutch” Warmerdam (pictured above) did the pole vault in the 1940s. He topped the world record by more than eight inches, reaching 15 feet, 7¾ inches outdoors in 1942 – a record that stood for 15 years.

Warmerdam was a self-taught pole vaulter who grew up in Hanford, vaulting in his backyard with the limb of a peach tree. He was voted as the top pole vaulter of the 20th century and the greatest track and field athlete of all-time in a 1955 United Press International poll. In 2000, he was named USA Track and Field’s American Pole Vaulter of the Century, and in 2001 — just seven months before his death at age 86 — he was voted by Fresno State fans as the Bulldogs’ Athlete of the Century.

14 – Two-time All-American Jack Mulkey (wide receiver/defensive back) became the first Bulldogs football player ever selected in the NFL Draft, chosen in the 15th round by the Chicago Bears.

18 – Ground was broken on the new Fresno State campus (Shaw/Cedar) on Oct. 17 — five miles east of the old campus (which is now Fresno City College).

The Nickname Bulldogs is Born

Legend has it that in 1921 student body President Warren Moody and friends were continually greeted on campus by a white bulldog. Soon, students were bringing the nameless pooch to football games, and Arids Walker made the motion to adopt the nickname in a student body meeting. On Nov. 21, the Morning Republican first referred to Fresno State as the Bulldogs.

But there was no official mascot until 1935, when a white, purebred bulldog named Touchdown was introduced.

In the mid-1950s, Moose debuted on the sidelines. But tragedy struck in 1958 after a game against College of the Pacific when Moose escaped his student keeper’s grasp and ran under the wheels of the visitors’ rooters train. 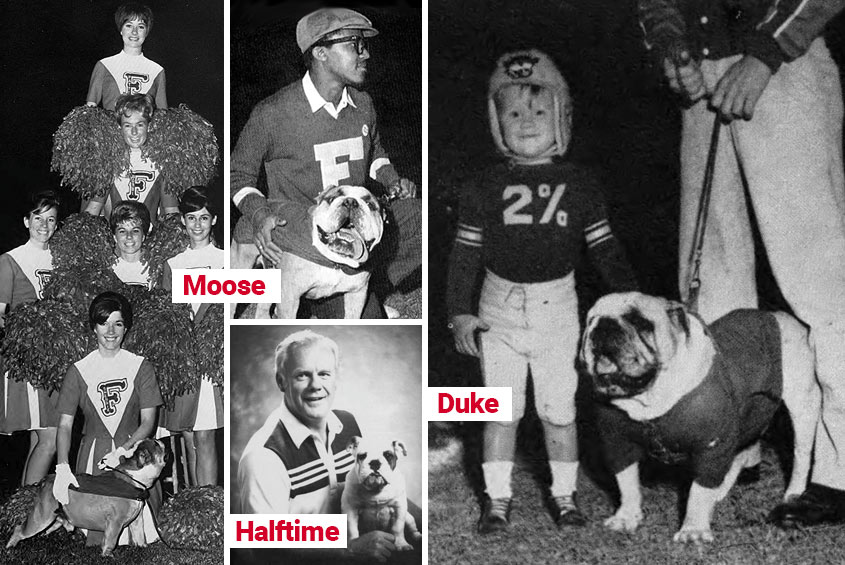 Upon hearing the news, the Marine Corps donated Moose II, who was later succeeded by Diamond. Moose III, described as “a shy version of [Fresno State’s] ferocious mascot” lived to be 13, but retired in 1973 after 10 years in the role because he feared the cannon that celebrated Bulldogs touchdowns. Moosifour was donated in 1973, but attracted little enthusiasm during a time when campus turmoil upstaged student spirit.

Fresno State’s first costumed-character mascot debuted in the 1970s. The first was a gray fur suit with a papier mache bulldog head and a large, round dog tag that read “Scooby.” 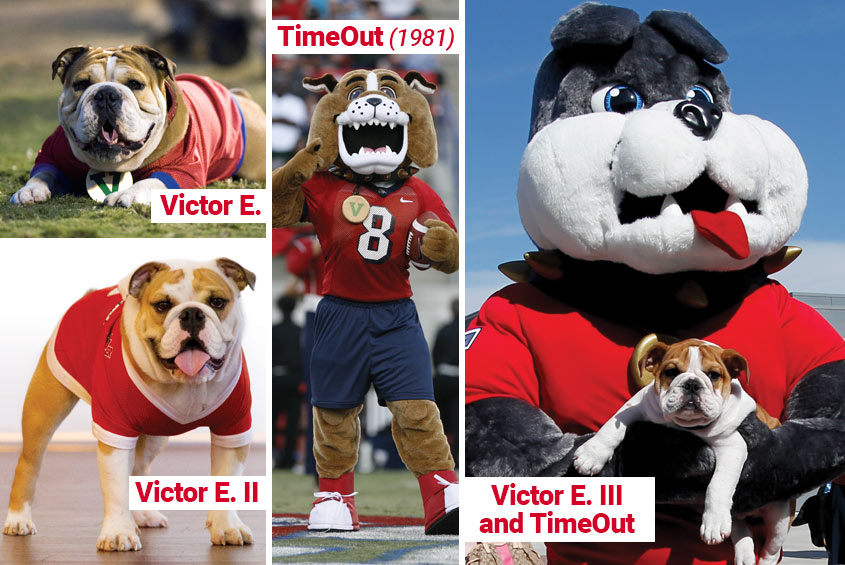 In 1981, student Gary Johns designed the familiar gray and white TimeOut costume with a lighter Fiberglas head, and student Charles Mugredechian was the first to wear the outfit. To this day, TimeOut has been

a fixture at games and community events. In 2007, a trimmer, more athletic, brown-colored costume was introduced but was promptly rejected by fans and was replaced the next year by a more traditional TimeOut.

In the 1980s football coach Jim Sweeney revived the live mascot tradition, purchasing Halftime. But the tradition faded again until 2006 when Victor E. Bulldog was introduced after a tryout that included more than 90 bulldogs. Beloved by fans, he succumbed to cancer in 2012 at age 8. Victor E. Bulldog II debuted Sept. 15, 2012, and tragically died from a bee sting before turning 3 years old. 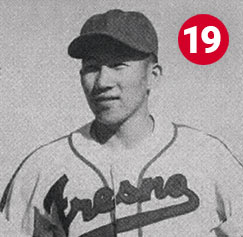 On June 12-13, 1964, at Ratcliffe Stadium, coach Dutch Warmerdam led a 15-man squad to Fresno State’s first team national championship in any sport. Competing in the College Division prior to Fresno State’s Division I days, the team scored 85 points, well ahead of second-place Long Beach State (57), Cal Poly (40), College of the Redlands (37), North Carolina (30) and Ohio State (26).

The team of Bryant, Nickolas, Workman and Newman also won the 440-yard relay. The team also picked up points in the 3-mile with a fourth-place finish from Howard “Spike” Biggers and a sixth-place finish from Rick Dahlgren. Bill Allen finished sixth in the pole vault.

Following the meet, the Bulldogs who finished in the top six of their events were invited to face the rest of the nation’s top teams in the NCAA University Division Championships in Eugene, Oregon. There, they finished third overall in the team standings, led by Craig’s triple jump national championship.

30 – The men’s tennis team won the Division II national championship with a win over Cal State Los Angeles in Fort Worth, Texas.

In 1971, Fresno State tennis began competing at the Division I level. In 1979, the women’s tennis team was established.

While women’s tennis remains a varsity sport at Fresno State, the men’s program was discontinued because of ongoing financial challenges that were exacerbated by the COVID-19 pandemic. The men’s tennis program, led by coach Luke Shields, claimed its first Mountain West championship in 2019. 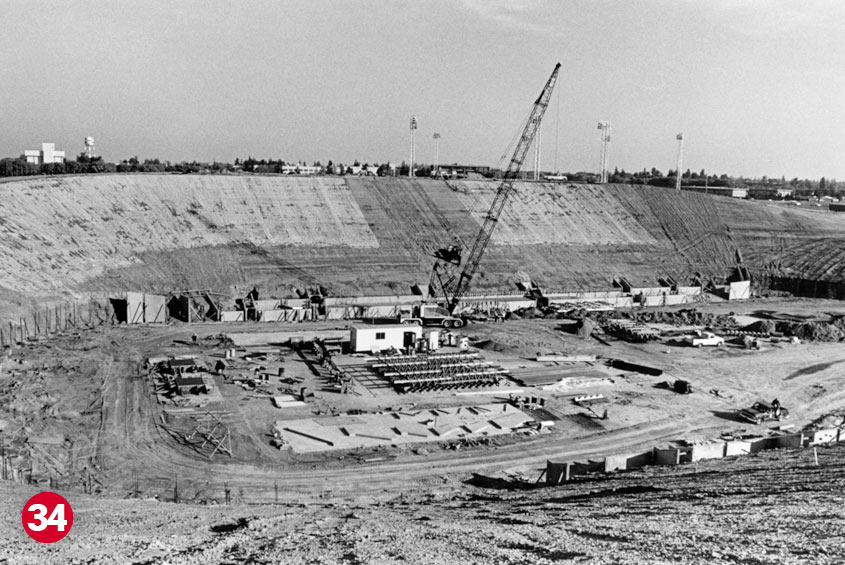 34 – “Stadium Builders”: Led by defensive backs Dean Jones and Bob Glazebrook, the 1977 football team reeled off eight straight wins to close the season at 9-2 and was dubbed the “Stadium Builders,” sparking momentum for the team to move from Ratcliffe Stadium to Bulldog Stadium, which broke ground in 1979 (pictured above). 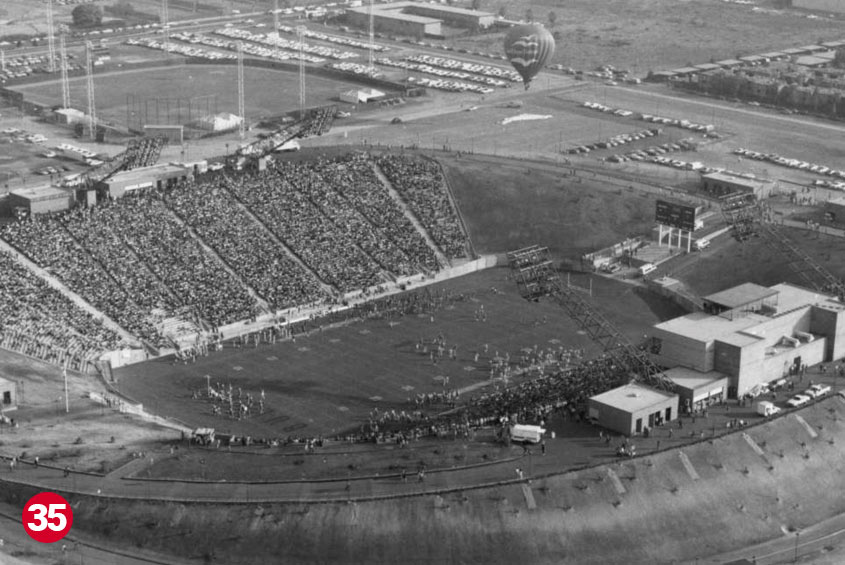 36 – The Fresno Bee’s Ron Orozco coined the term Red Wave for the Fresno State fan base on Jan. 17 (pictured below).

37 – Fresno State’s costumed mascot TimeOut was introduced. Students performing as TimeOut are eligible for an annual $2,000 scholarship through the Bulldog Pride Fund. 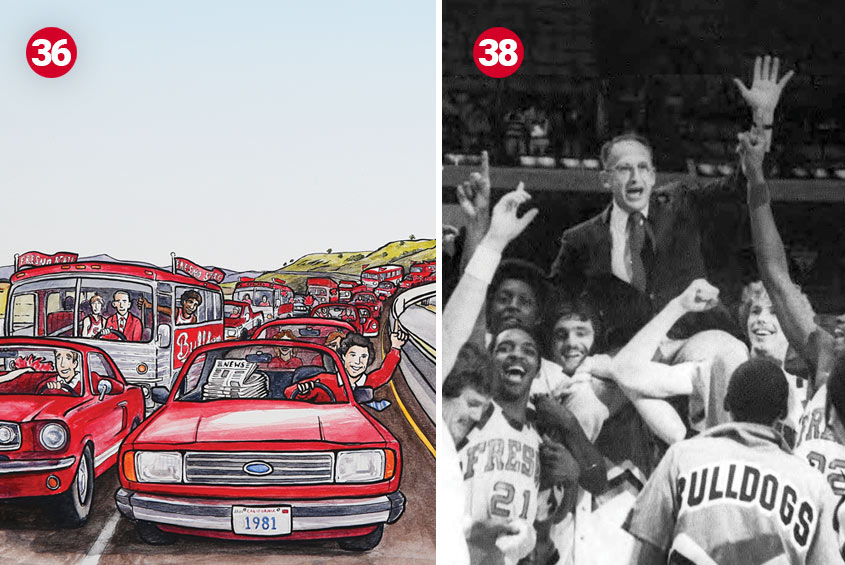 38 – The men’s basketball team was ranked as high as No. 11 nationally and made its first Sweet 16 appearance (pictured above). 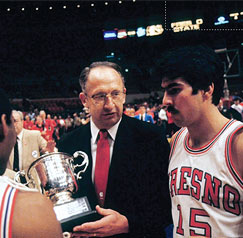 In the early 1980s, the newly coined Red Wave flooded into Selland Arena for Fresno State men’s basketball games. With coach Boyd Grant leading the program to new heights, the arena was lovingly nicknamed “Grant’s Tomb.” But it was what they did beyond the Valley that got the nation’s attention.

First it was the 1981-82 season, when the Bulldogs finished 27-3 (13-1) to win the Pacific Coast Athletic Association title. Led by Rod Higgins, they advanced to the NCAA Tournament, opening with a 50-46 win over West Virginia to advance to the Sweet 16 for the first time in school history before being eliminated by Patrick Ewing-led Georgetown.

In 1982-83, the “Bookend Forwards” Ron Anderson and Bernard Thompson – along with point guard Tyrone Bradley — led Fresno State to an National Invitation Tournament (NIT) championship that garnered attention across the country. About 1,500 Red Wavers made the trip to New York to see the Bulldogs win at Madison Square Garden – during an era in which the NCAA Tournament included just 32 teams and the NIT was more competitive than ever. The Bulldogs beat UTEP, Michigan State and Oregon State before heading to New York, where they defeated Wake Forest and DePaul for the title. Thousands of fans gathered on campus for a historical celebration upon the team’s return to Fresno (pictured left).

That fanfare carried over to 1983-84, when the Bulldogs and their “Bookend Forwards” knocked off No. 3 Houston (and star Akeem Olajuwon) 68-61 and No. 5 UNLV 68-43. After beating UNLV again to win the PCAA Tournament, the Bulldogs earned an NCAA Tournament berth, losing to Karl Malone’s Louisiana Tech team in the opening round.

40 – Men’s basketball won the NIT championship at Madison Square Garden; before being welcomed home with a parade (pictured right). 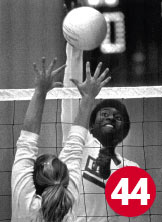 All-American Ruth Lawanson became the first female athlete in Fresno State history to have her jersey number retired on Jan. 21, 1985, at the volleyball team’s awards banquet.

On Nov. 9, 2019, she was further honored when her No. 15 jersey was ceremoniously raised to the rafters in the Save Mart Center, the arena the Bulldogs volleyball team now calls home.

Lawanson, the 1984-85 Fresno State Athlete of the Year, led the Bulldogs to a program-record 26 wins during her senior season in 1984, and she remains the program’s career leader in hitting percentage.

The Nigeria native went on to compete in Major League Volleyball, earning Player of the Year honors in 1988 before helping Team USA to a bronze medal in the 1992 Barcelona Olympics. 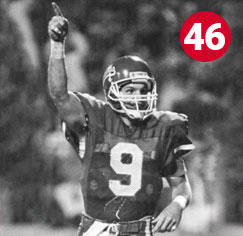 45 – Men’s soccer advanced to the Final Four of the NCAA Tournament.

46 – On Nov. 22, during the first half against Utah State, quarterback Kevin Sweeney (pictured above) connected on an 11-yard pass to Stephen Baker to become the NCAA’s all-time passing leader, breaking Doug Flutie’s record from Boston College. Sweeney finished with 10,623 yards (10,808 including bowl games). 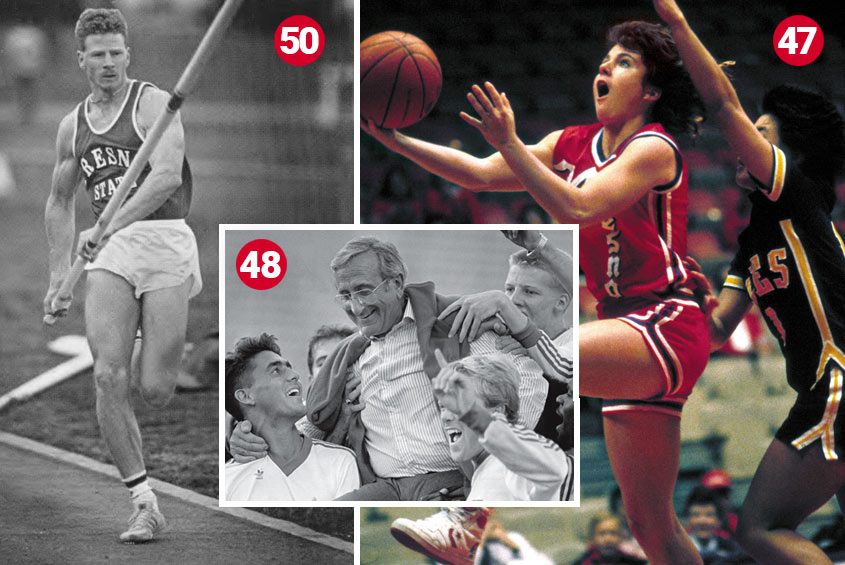 47 – Wendy Martell (pictured above) became the first women’s basketball player to have her jersey retired after becoming the first All-American in program history with a school-record 1,595 points (which now ranks fifth all-time). Her No. 34 jersey was later raised into the Save Mart Center rafters in 2020.

48 – Under coach Jose Elgorriaga (pictured above), who was also a Spanish professor on campus, men’s soccer achieved the school’s first No. 1 national ranking in any Division I sport. On Sept. 27, an NCAA-record 12,224 fans watched the Bulldogs host San Francisco.

50 – Doug Fraley (pictured above) won the NCAA indoor and outdoor national championships in pole vault with a record-mark of 18-feet, 11 inches. He also won the 1986 indoor national title.

51 – Baseball won a school-record 32 straight games and was ranked No. 1 nationally before advancing to its second College World Series. PCAA Player of the Year Lance Shebelut set a school record with 32 home runs. 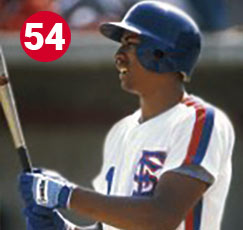 55 – Men’s golf placed fifth in the NCAA championships, the school’s highest-ever finish. Mike Watney coached 29 All-Americans, including David and Kevin Sutherland, and won 12 conference championships in 34 years leading the program before he retired in 2013.

57 – Two-time All-American men’s soccer player Gerrell Elliott was named the NCAA player of the year. He was Fresno State’s career leader in goals (54) and points (136).

58 – Pitcher Bobby Jones was named NCAA Player of the Year with a 16-2 record and 1.88 ERA. He had an NCAA-record 166 strikeouts and led the Diamond ’Dogs to their third College World Series.