What Could Have Been?

March sadness. Not a buzzer-beating 3-pointer, nor an attempt beyond the arc. No channel surfing to find TruTV for the first time since last March. No tuning in to see if Cinderella finds her glass slipper. Because there is no Cinderella, no upsets, no games to deliver — not a single shining moment for us to remember.

A Fresno spring without the zip of a pitch or the thump of a mitt. No bats are pingin’, no seventh-inning fan singin’. Not a ticket for sale, not a peanut to shell. Just two diamonds, with no ’Dogs and, sadly, no farewell.

An equestrian season left incomplete, though they ranked top 10. An All-American wrestler and his teammates with no one to pin. A nationally ranked water polo team with no games left to win.

A long list of unknowns, we hope soon will end. So we can sing “Bulldog Spirit” again and again.

For the first time since World War II, Fresno State student-athletes lost their ability to compete. Their seasons ended abruptly, like books without endings. Their classes and team meetings turned to virtual instruction, and many of them left town to be with their families amid the uncertainties of the COVID-19 situation.

People sometimes say there are more important things than sports. While that is true, sports are woven into American culture — to the Valley’s culture — for a reason. Because few things are capable of bringing people together and uniting, entertaining and exhilarating them the way sports can.

This spring, the Red Wave was left with no one to cheer at a time when cheer was needed most.

Prior to the season ending, the defending Mountain West champion men’s tennis team was ranked as high as No. 48 in the nation, women’s tennis and track and field were enjoying promising seasons under their first-year coaches and swimming and diving finished sixth at the Mountain West championships and had sophomore diver Yuliya Tykha preparing for the NCAA championship.

With the NCAA approving the possibility of an extra year of eligibility for seniors in spring sports, Fresno State athletics is working with each head coach and student-athlete on academic and financial solutions while also supporting the financial, academic and gender equity priorities of the Athletics Department as a whole.

It certainly was a painful and challenging time for all on campus as University leaders rushed to take action to help keep students, staff and fans safe. And if we’ve learned anything about the Bulldog spirit, we know these student-athletes will persevere, remain committed to their studies and be back on the fields, courts and pools as soon as it’s safe.

In the following spread, Fresno State Magazine shares a glimpse of several special seasons cut short and what could have been. 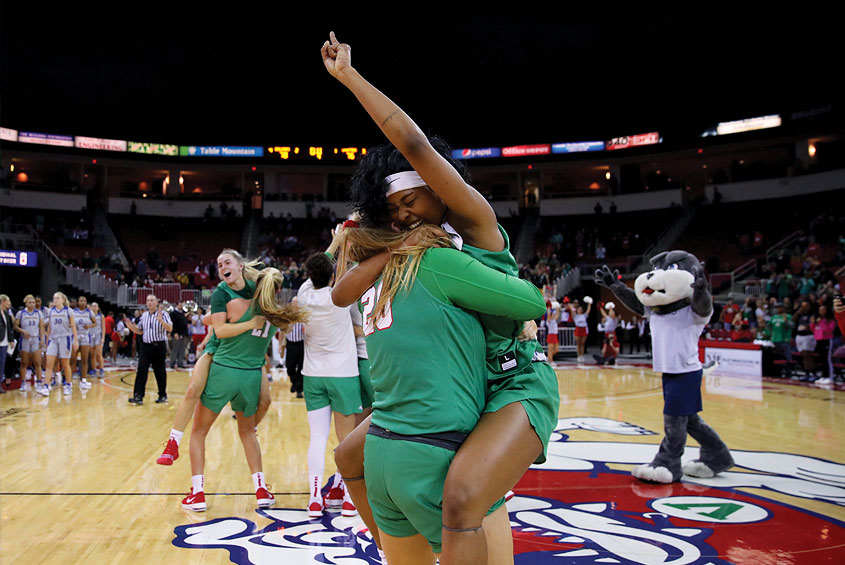 After dominating the regular season on its way to a Mountain West championship, the Fresno State women’s basketball team (25-7, 16-2 MW) had a disappointing last-second loss in the conference tournament championship game in Las Vegas. The Bulldogs were eagerly awaiting their postseason draw, whether it be the Women’s NIT or the NCAA Tournament. Unfortunately, we’ll never know what was in store, as the season came to a halt before postseason play, shutting down March Madness. The good news — Fresno State potentially returns all five starters next season, including reigning Mountain West player of the year Maddi Utti and twin freshmen sensations Hanna and Haley Cavinder. The Bulldogs were one of just two teams in the country with three players who averaged more than 15 points per game — the other was No. 2 Oregon.

On March 12, after finding out there would be no postseason, Fresno State coach Jaime White tweeted, “Days like today remind me that life’s a journey. All those special moments along the way are important and the people we share it with change our lives. #ProudCoach #SpecialYear.” 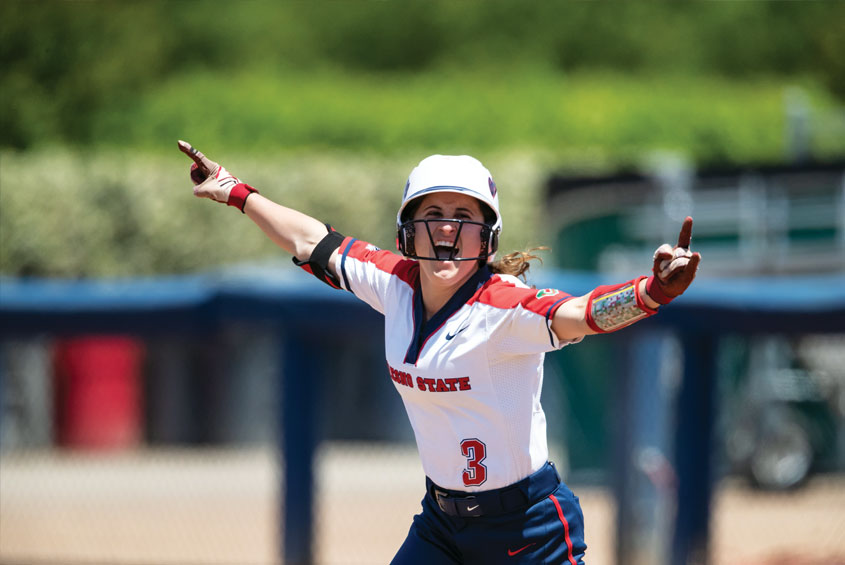 Fresno State softball was 21-4 and ranked No. 23 in the nation in the ESPN.com/USA Softball poll when its season came to an abrupt end just before Mountain West play began. The Bulldogs’ marquee victory was a 4-3 win over No. 3 Texas at the prestigious Judy Garman Classic in Fullerton. Fresno State was a perfect 15-0 at home, leading the nation in triples and leading the Mountain West in runs (5.92 per game). Sophomore McKenzie Wilson was hitting .474 on the season and had 27 steals—on pace to break her own record of 39 set last year. In the circle, junior Hailey Dolcini was 10-1 with a 1.51 earned run average.

“What we did over the course of 25 games was remarkable and a testimony to the hard work of our players and staff,” coach Linda Garza said. “We recruited talent, coached hard, the players were dialed in and executed the game plan every day to earn these rankings. We are excited about the future of this program, and we are proud to put Fresno State on the national map again.” 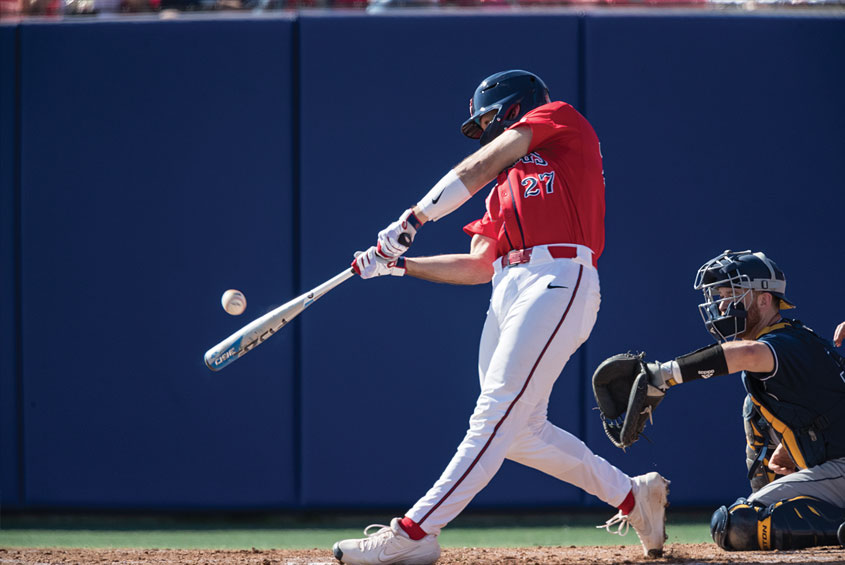 Just days after their dramatic midweek win over Pacific, the Diamond ’Dogs were en route for a three-game series at Oklahoma State when they got called back to campus and soon learned they would be hanging up their cleats for the rest of the season. In that March 11 game against Pacific, Fresno State won 7-6 on a walk-off home run by junior catcher Zach Presno at Pete Beiden Field at Bob Bennett Stadium. It was Presno’s team-leading eighth home run of the season, as he was on pace to challenge some of the top single-season power numbers in program history. The Bulldogs finished 9-7 with a challenging early-season schedule, and were thought to be one of the top Mountain West title contenders. On March 13, after finding out the season was ending, Bulldogs coach Mike Batesole simply tweeted a blank lineup card — no words necessary. 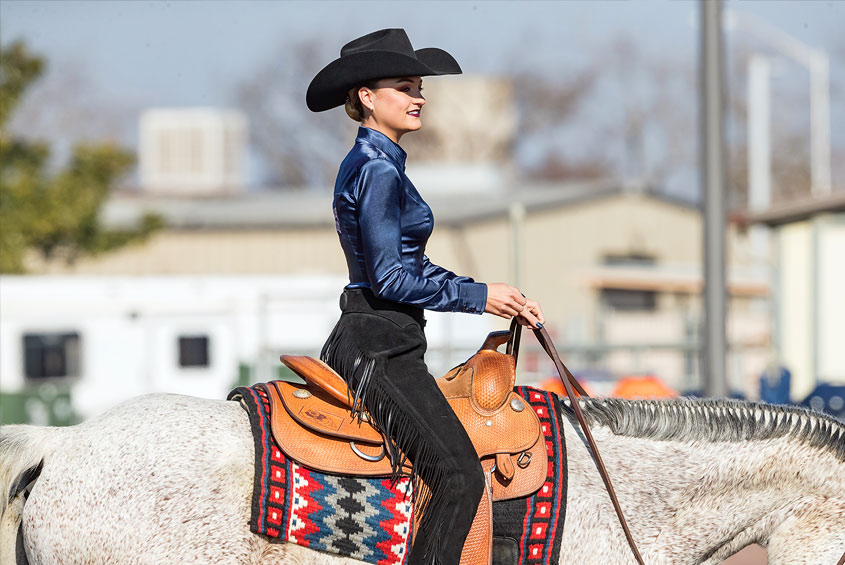 An incredible year for Fresno State equestrian was cut short just before postseason play — and there’s no telling what the Bulldogs could have accomplished. The team finished the season, its first as a member of the Big 12 Conference, ranked No. 4 in the nation. Fresno State (8-5, 3-2 Big 12) tallied wins against No. 2 Oklahoma State, No. 3 SMU, No. 7 Texas A&M, No. 8 TCU and No. 9 Baylor. The Bulldogs lost 10-8 at home to No. 1 Auburn. Fresno State had a program-best seven All-Americans, including first-team selections Bailey Alexander (reining) and Alivia Hart (fences). Senior Paige Barton earned her second straight All-America honor in reining, and Hannah Buijs (second-team) and Nicole Campbell (honorable mention) represented the Bulldogs in horsemanship. Cecily Hayes earned honorable mention for both fences and flat. Fresno State had one regular season contest remaining at Oklahoma State before the Big 12 championship and the NCEA national championship. All were canceled due to the COVID-19 situation.

“We are excited to have these honors in our first year with the Big 12,” coach Eric Hubbard says. “These young women have worked hard all season and have led their team to the best season in program history.” 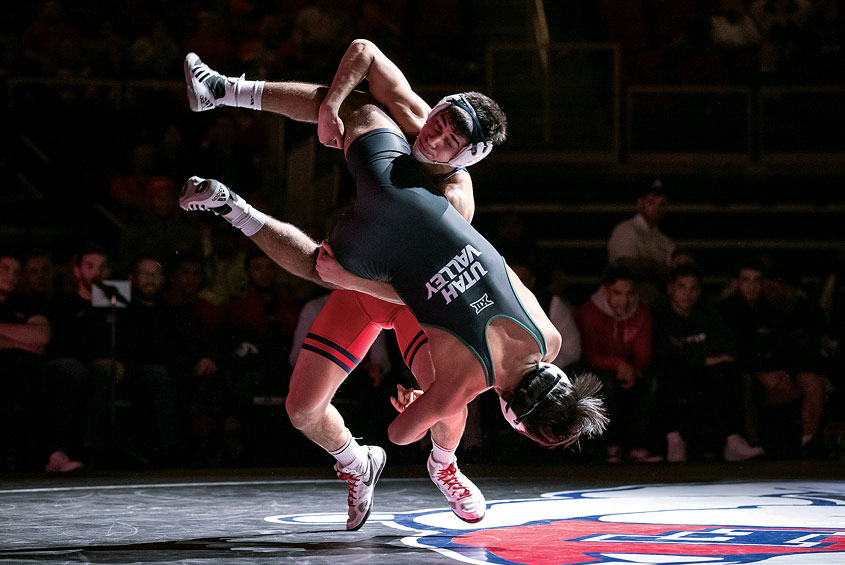 Five Fresno State wrestlers were preparing for the NCAA championships when news broke that the season was being canceled due to safety concerns surrounding COVID-19. The championships were set to begin on March 19 in Minneapolis, and Fresno State was led by 12th-seeded heavyweight Josh Hokit (23-4), a two-time All-American and dual-sport athlete who was recently signed by the San Francisco 49ers. Sophomore Jacob Wright (25-8) was seeded No. 25 at 157 pounds, junior Greg Gaxiola (20-10) was seeded No. 32 at 149 pounds, junior D.J. Lloren (22-6) was seeded No. 25 at 141 pounds and redshirt freshman Lawrence Saenz (14-12) was seeded No. 33 at 133 pounds. As a team, the Bulldogs finished 9-11 overall and 4-4 in the Big 12 Conference. The Bulldogs finished ninth nationally in attendance with an average of 2,596 fans at the Save Mart Center. 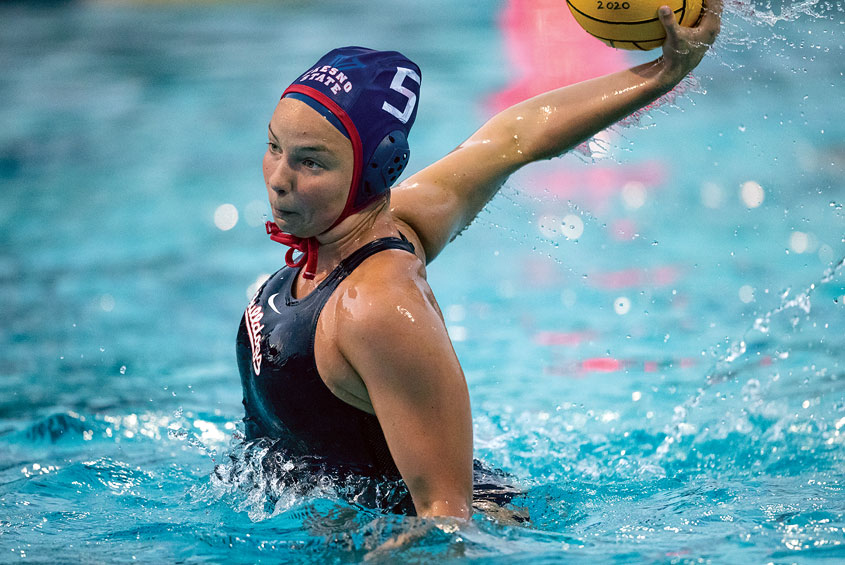 Fresno State’s water polo team finished the season ranked No. 11 in the nation, showing great promise against a challenging early-season schedule. The Bulldogs (8-7) were 4-0 at home and had a season-high 21 goals in a 21-5 win over Fresno Pacific on Feb. 23, in what ended up being the final game of the season. Two Bulldogs earned All-American honors for the third-year program, including junior center Emily Nicholson, who became the first Fresno State player named third-team All-America after leading the team with 32 goals. Sophomore guard Daphne Guevremont earned honorable mention honors with 21 goals and a team-high 20 assists.