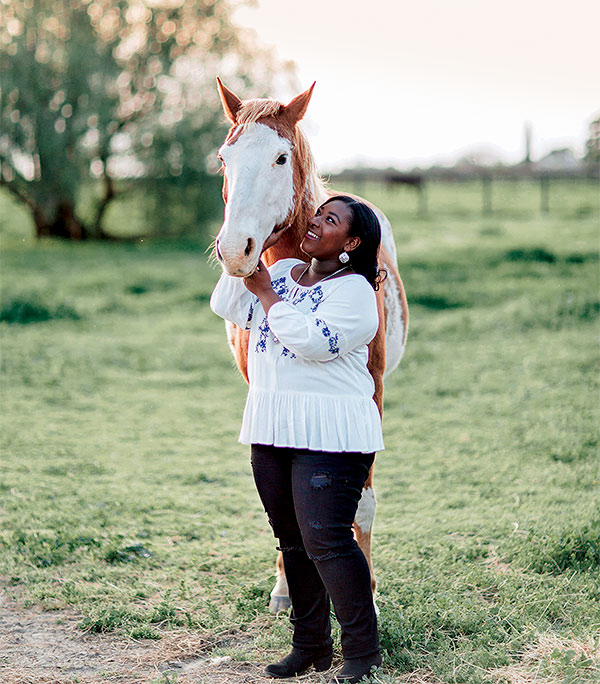 ZaJria Bradshaw read the Canterwood Crest series of books in sixth grade, about a young student at an elite school of competitive equestrian riders. Then, she asked her dad to sign her up for riding lessons, which she says set her on an untraditional path for an African American girl from Manteca.

The Fresno State junior is majoring in equine science with a plan to earn her master’s degree and a doctorate to specialize in equine nutrition and research. She thought about teaching, going into physical therapy like her older sister or becoming a veterinarian, but her interest in horses kept her on a path to the farm.

“I picked up (a love of horses) because of the book series. It was so interesting. Once I started, I never looked back,” says Bradshaw, whose mother is a hair stylist and father delivers for the United Parcel Service. The family also operates Little Beez Italian Ice at festivals and fairs during the summer. “I’m the only person in my family who rides horses. We never had a farm. No one in my family is in agriculture. It’s not really a thing in my family.”

Reflecting a national trend that hasn’t budged in decades despite outreach efforts, few African American students major in agriculture at Fresno State. There are over 700,000 members of the Future Farmers of America, and according to its 2019 report, 70% of the membership is white while 15% is Hispanic and only 4% is Black.

Bradshaw was among only 31 African American students enrolled in the Jordan College of Agricultural Sciences and Technology during the 2019 fall semester, according to enrollment numbers from the Office of Institutional Effectiveness at Fresno State. That semester, a total of 635 African American students were enrolled in programs across the University, making up about 2.6% of the 24,000 students at Fresno State.

Since 2017, the University has focused concerted efforts to increase African American student enrollment, college readiness and graduation rates through the African American Initiative in the Office of Outreach and Special Programs. The goal is to connect with middle and high school students early in order to increase the number of high school seniors who are California State University-eligible, program coordinator Wendy Nelson says.

Program staff have participated in school resource fairs and community events. Fresno State President Joseph I. Castro and his family, cabinet members, college deans and others have attended services at African American churches during Super Sunday, the CSU’s annual flagship event focusing on college achievement for African American students. And during Preview Day, African American students have had an opportunity to experience life on campus with an overnight stay in the dorms.

The African American Initiative continues to work with campus offices like the Cross Cultural and Gender Center, Admissions and Recruitment, and local area colleges to increase engagement and recruitment, Nelson says.

The Jordan College of Agricultural Sciences and Technology actively recruits students from all backgrounds interested in agricultural majors. Student ambassadors from the college programs and the Multicultural Scholars in Agriculture program also do their part to promote the college and to mentor and support students interested in agricultural careers, says Michelle Perez, Fresno State recruitment counselor and liaison to the Jordan College. Alumni are the biggest advocates of the college, she says.

Bradshaw learned about Fresno State through a high school teacher who grew up in Clovis. The teacher told her about the Jordan College and its agricultural program, which provides early hands-on

experiences for undergraduate students. During a campus visit, Bradshaw says she knew Fresno State was where she needed to be.

She took a colt-training class her freshman year that allowed her to be “hands all in with horses.” She loved it, and since then has had motivating experiences with professors who use real-life knowledge and experiences to teach instead of only using textbooks, she says.

But like many underclassmen, Bradshaw had her challenges as well, like self-doubt and a lack of diversity in some classes, which wasn’t unexpected, but discouraging, Bradshaw says, and it left her wondering where she fit in.

“When I sit in my animal science classes, I don’t see anyone who looks like me. This has been a challenge to deal with because all throughout elementary, middle and high school, my classes were always racially diverse, and I would always have at least one other person who looked like me,” Bradshaw says.

When you take into consideration Bradshaw’s background, she isn’t the typical ag school student, says Brett Behlen, who was Bradshaw’s colt instructor in 2018-19. But “she’s got the passion and willingness to be outside of her comfort zone and to learn what the instructor is trying to teach so it turns out she has what you do want in the ideal student,” he says.

Bradshaw learned to ride and care for horses at Team Scott Equestrian Outreach, an equine therapy program in the Bay Area operated by an African American deputy from the Alameda County Sheriff’s Office and his wife. The couple started the program 12 years ago to help their son who had behavioral challenges. When Bradshaw was 15 years old, she started working in the program and participating in events like the Bill Pickett Invitational Rodeo, which celebrates and honors African American cowboys and cowgirls, and their contributions to building the West.

“Many people do not know the history of African American cowboys and cowgirls,” Bradshaw says. “Bringing awareness to minorities and African Americans in the field is so important. No matter what you look like, race you are or background you are, it’s never too late to learn and keep going.”

Despite her early challenges, Bradshaw says her time at Fresno State has been fulfilling. She turned to the Office of Black Student Success at Fresno State for mentorship, where she met adviser Davion Baker and a peer mentor. They are “people who can truly support you, knowing and being able to understand the struggle just a little bit because they have been minorities in their own settings as well.”

Her horse, named Sage, also provides her with time away from the stresses of life. The 17-year-old quarter horse was gifted to her from Team Scott during the 2019 Bill Pickett Invitational. “It’s allowed me to step up and put my own knowledge to the test and apply my own knowledge,” Bradshaw says about owning her own horse.

Bradshaw is a member of Alpha Zeta, a professional fraternity for students and industry professionals in the agriculture and natural resources fields. And this year, she is serving as vice president for Fresno State’s chapter of Minorities in Agriculture, Natural Resources and Related Sciences, also known as MANRRS.

“Being a minority, I have to have as much as I can to build myself up especially because I don’t come from an agricultural family — a family that is established and already has these connections,” Bradshaw says. “I’m starting something new, from the ground up. I love to learn. I have always found knowledge in learning things that are super interesting. I want to continue to grow. I want to continue to learn. I have to fight for things much harder than a lot of other people. You learn to keep going with it.”

— BoNhia Lee is a writer in University Communications at Fresno State.