There was a time when Jorge Gomez Jr. and his family lived out of their van while his father looked for work in San Jose.

His parents immigrated to the city from Mexico in the 1980s for a better life. Gomez was born in San Jose. When his father finally found work in a warehouse, they were able to rent an apartment.

But the challenges kept coming. Gomez spent his childhood in and out of the hospital with his sick mother who couldn’t keep any food or water down and who endured exploratory surgery to find out what was wrong with her. She was later diagnosed with a tumor behind her stomach.

That experience led Gomez to pursue a nursing degree at Fresno State, where he heard there was a great program. He expects to graduate this fall.

Like Gomez, many Fresno State students overcome great challenges before pursuing higher education — an effort that can change their lives, and the trajectory of their families, forever.

The University has excelled at helping students beat the odds. Year-over-year, the Fresno State has appeared at the top of national rankings lists for graduation-rate performance and social mobility — the movement of individuals or families through a system of social hierarchy.

Fresno State also placed fifth overall in graduation-rate performance among all national universities, according to an analysis of U.S. News’ Academic Insights data used in the magazine’s annual rankings. The University has ranked No. 3 among public universities for the past four years and was No. 1 in 2017.

“This ranking shows the determination and resilience of our talented students, who come from diverse backgrounds and experiences, to achieve their higher-education dreams,” says Fresno State President Saúl Jiménez-Sandoval. “It is also a recognition of our outstanding faculty and staff who inspire and empower our students for success. And this is the best part: Their success is directly tied to the success of our community and a higher quality of life in our Valley.”

U.S. News and World Report has published its Best College rankings for the past 37 years as a guide for students and parents to compare the academic quality of universities and colleges across the nation. The rankings evaluate campuses on a number of factors, including graduation and retention rates, faculty resources, academic reputation, financial resources and graduate-rate performance.

The magazine’s latest rankings assessed 1,466 bachelor’s degree-granting institutions. Here’s a look at other categories where Fresno State continues to deliver on its mission to educate and empower students for success.

● Moving up five spots from last year, Fresno State ranked No. 21 in social mobility for how well schools graduate students who receive federal Pell Grants, meaning they come from low- to medium-income households.

● The Lyles College of Engineering’s undergraduate engineering programs ranked No. 53 out of 246 universities, an advancement over the previous year when it ranked No. 60.

● In a new ranking, the Fresno State undergraduate nursing program placed No. 251 out of 694 institutions that offer a bachelor’s in nursing.

● The University ranked No. 107 among all national public universities, and was one of two California State Universities to make the list.

Fresno State’s reclassification as a Carnegie doctoral university in 2016 means it joined the top research universities in the nation, such as Stanford, Columbia and Harvard, in rankings produced by the publication. Fresno State offers doctoral degrees in nursing, physical therapy and educational leadership.

Fresno State has appeared on several national college rankings for excellence in social mobility, research and service over the years. In August, the University ranked No. 54 among the best national universities in Washington Monthly’s 2021 College Rankings, and was the only California State University to make the top 100. Fresno State also ranked No. 41 in the Best Bang for the Buck: West category.

— BoNhia Lee is a writer in University Communications at Fresno State. 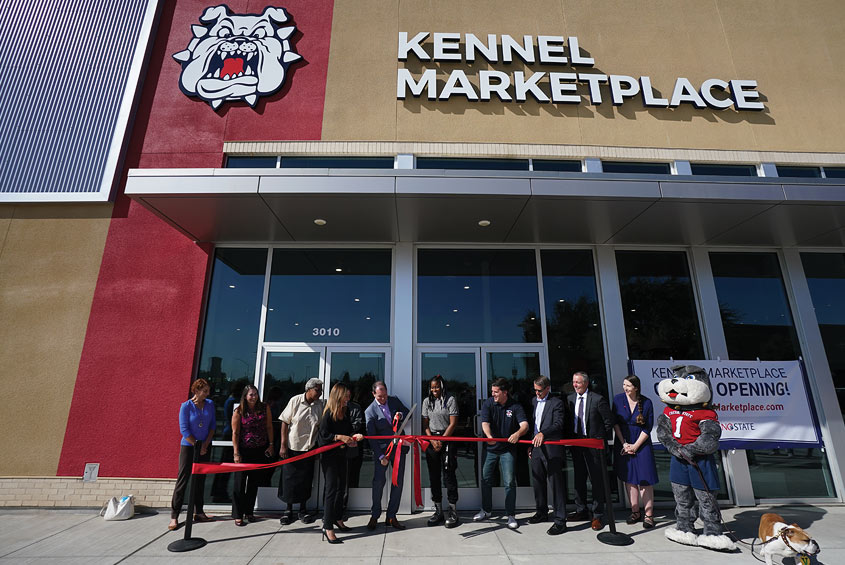 “We are excited about the opening of this new campus store in partnership with Follett Higher Education Group, which also manages our on-campus Kennel Bookstore,” says Deborah Adishian-Astone, Fresno State’s vice president for administration and chief financial officer. “With the inclusion of a Starbucks café operated by our campus Dining Services team, this new location at Campus Pointe provides an opportunity to serve our campus and greater Central Valley community with branded Fresno State merchandise. Additionally, this new retail operation including Starbucks will provide a significant number of part-time employment opportunities for our students.”

Gifts of All Sizes Help Students in a Major Way 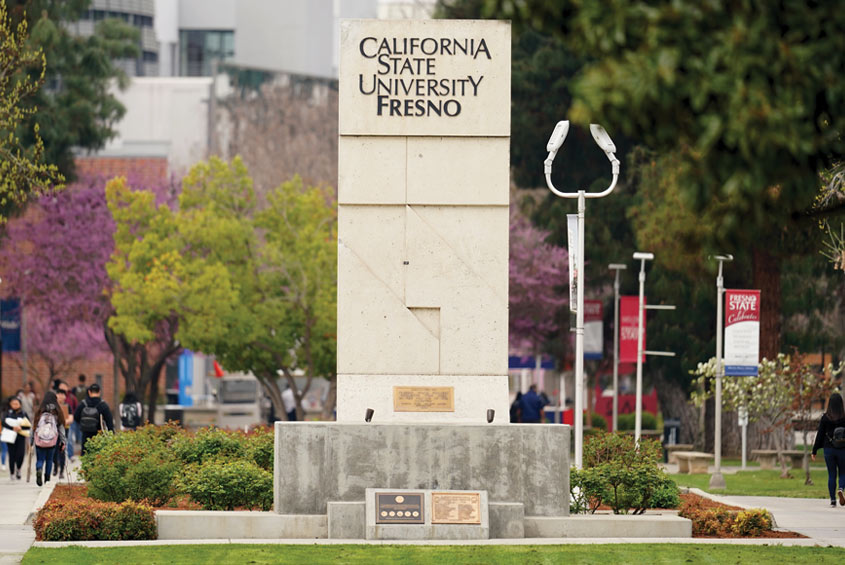 The pandemic hit the family business hard, shutting it down for a couple months. Business still has not returned to normal. Ceja didn’t know how her dad, the breadwinner in their eight-person family, could afford to send her and her older sister to college.

At the start of the fall semester, Ceja’s worries were answered when she learned that she was the recipient of the C. Ray Steele Jr. and Mary Lou Steele Family Scholarship. The four-year renewable scholarship covers tuition and fees.

“Having donors like these reassures you that you’re on the right path and doing the right thing,” says Ceja, now a sophomore chemistry major with plans to go into anesthesiology. “It’s a good feeling [for them] to believe enough in you to fund your dreams. Some people have dreams they can’t achieve because money is an obstacle. Seeing someone grant you this gift like ‘don’t worry about that’ is a relieving feeling. Thank you so much for believing in me and my dreams and believing I can make something for myself. I’m going to get there!”

The Steeles have long supported students at Fresno State, and continued their commitment to student success with a $100,000 gift for an endowment. Through generous donors like the Steeles, gifts to the University during the 2020-21 academic year totaled about $28.4 million — $24 million for academics and $4.3 million for athletics.

“Despite the incredible challenges over the last year, the support of our Fresno State alumni and friends remained steady,” said President Saúl Jiménez-Sandoval. “Their generosity makes a lasting impact on the success of our talented students.”

Here’s a look at some of the wide range of gifts from the past year: 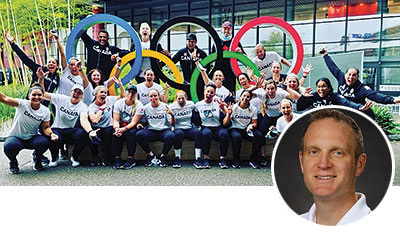 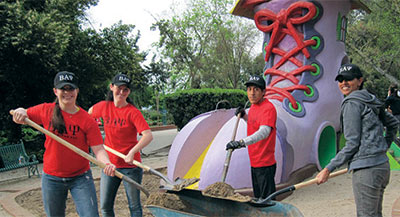 Thanks to efforts of 12,690 students, faculty and staff, Fresno State provided more than 1 million hours of service to the community during the 2020-21 academic year. This is the 12th straight year it has surpassed 1 million hours. The total economic impact of that service is estimated to be $41.3 million, based on calculations from the Independent Sector, a national nonpartisan network of nonprofit and philanthropic organizations and professionals.

Sociology professors Dr. Amber Crowell and Dr. Janine Nkosi were invited to represent the Central Valley and participate in the White House Summit on Eviction Prevention in June. The professors have worked with community organizations to combat the local housing crisis over the past several years. 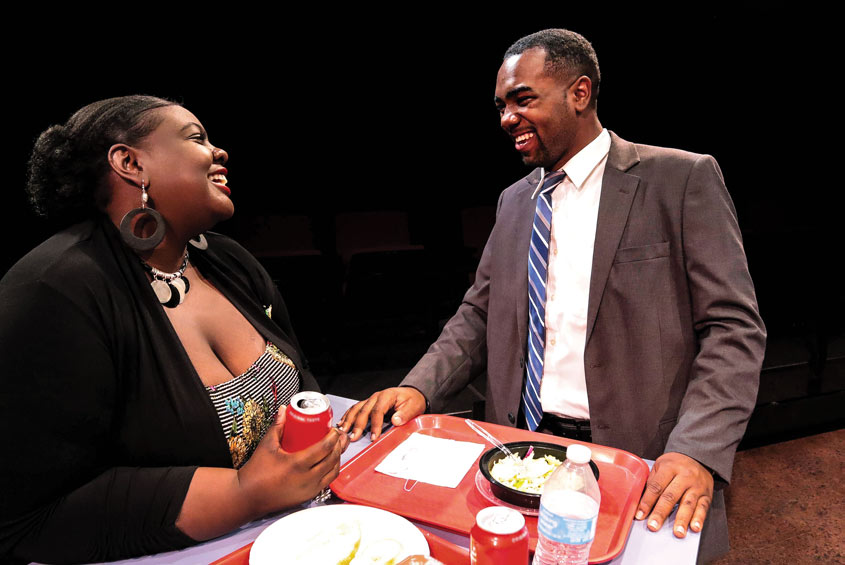 “Jimmy and Arium’s performance in the final round of the Irene Ryan regional competition was extraordinary,” says Fresno State theatre professor Brad Myers. “The audience response was one of the most enthusiastic that I have ever seen, topped only by the audience reaction when [Haynie] was announced the winner. I was in a state of disbelief and exuberant joy. I cried; I howled; I laughed uncontrollably. It took me a long while to calm down and stop embarrassing myself.”

The winners of all eight regional festivals typically travel to Washington, D.C. to compete at the National Festival at the Kennedy Center. However, due to the ongoing COVID-19 pandemic, the festival had to be postponed.

Nearly a year later, the national competition switched to a virtual format. The winners of each region were asked to submit a video recording of their acting package. The package included two contrasting scenes and a monologue; all to be performed in under six minutes.

Haynie and Andrews both took home national awards. Haynie was awarded the National Partners of the American Theatre Classical Acting Award and Andrews received The Kingsley Colton Award for Outstanding Partner. Both awards came with a cash prize.

“Winning either of these prestigious awards is a noteworthy accomplishment which can help vault a professional career,” Myers says. “These honors are a validation of the actor training that is provided by our department. The Fresno State brand is enriched, and many students who are choosing a university for theatre training may be more likely to consider our University because of this visibility. Also, the impact of such an honor can instill a great pride in our past and present theatre students.”

A Partnership to Impact Generations of Valley Kids 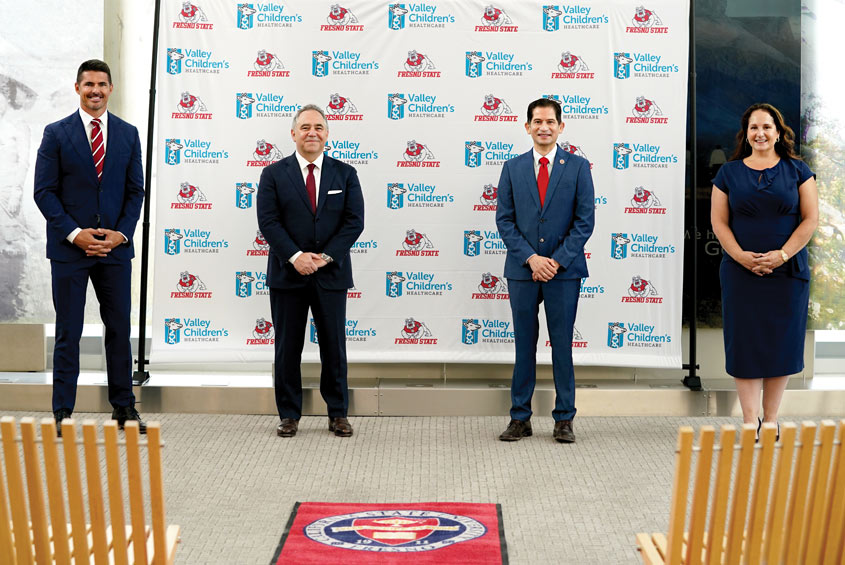 Fresno State President Dr. Saúl Jiménez-Sandoval and Valley Children’s Healthcare President and CEO Todd Suntrapak (pictured above) announced an expansive partnership that will have a lasting impact on students, faculty and the community.

Valley Children’s Healthcare and Fresno State have had a long-standing relationship as both organizations have been invested in the health and well-being of youth and families in the San Joaquin Valley for generations. This sponsorship further expands the partnership of Fresno State and Valley Children’s, and their shared commitment to education and health.

“Our partnership aligns with our commitment to ensure our kids have every chance to learn, grow and live their healthiest lives possible,” says Suntrapak. “The health and well-being of our children is dependent on organizations like Fresno State and Valley Children’s to invest in their futures and to create
new opportunities for them.”

Former Fresno State football standouts, brothers Derek and David Carr look forward to seeing two institutions they admire and support working even closer together in the decade to come. Both the Carrs’ families have turned to Valley Children’s to provide care to their own children, and both serve as ambassadors for the health care network. Derek Carr’s son, Dallas, underwent life-saving surgery at Valley Children’s Hospital and spent several weeks in the neonatal intensive care unit on the Madera campus. Three of David Carr’s children have Type 1 diabetes and are cared for by specialists at Valley Children’s outpatient specialty care center in Bakersfield.

“David and I have a strong connection to Valley Children’s as grateful parents for the life-saving care our children have received there and to Fresno State for all that we received as students,” says NFL quarterback Derek Carr. “To be able to play a part in strengthening and expanding the long-term relationship between these two institutions has been rewarding.” 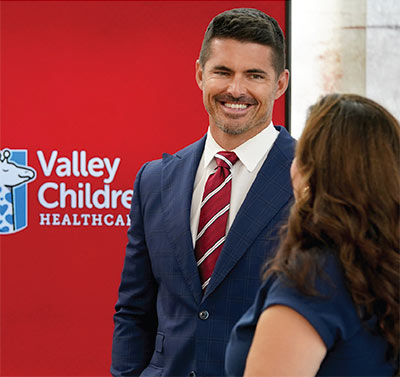 “Derek and I loved our time playing at Fresno State and still consider it a home away from home,” says former NFL quarterback and current NFL Network Analyst David Carr. “We are both excited to see Valley Children’s and Fresno State grow its partnership that will benefit so many students and the community.”

The 10-year agreement with the California State University, Fresno Athletic Corporation — a recognized campus auxiliary organization — will provide financial support of $1 million per year over the 10-year period for operations, scholarships, collaborations for student-athletes, youth programs, opportunities to support students pursuing degrees in health, and other opportunities impacting the ability to strengthen the University’s work in children’s health.

The agreement also includes the naming rights of Bulldog Stadium and, over the next decade, will provide the opportunity for future improvements to enhance the stadium. The name of the football stadium is subject to the approval of the California State University Board of Trustees and will be determined in spring 2022 in accordance with CSU policy.

“Bulldog Stadium has long been the physical connecting point that proudly brings our Valley community together in celebration, and this union of two iconic brands in our region will only help to enhance those opportunities,” says Terry Tumey, director of Athletics.