From internment camp to the record books, Fibber Hirayama etches his name in Japanese-American baseball lore

The man labeled by many as the greatest athlete, pound for pound, in Fresno State history could amble through a sold-out Bulldog Stadium these days without turning a single head. Follow him on his annual trek to Hiroshima, Japan, however, and you’ll watch his right hand go numb from scribbling endless autographs for awestruck admirers.

Even at age 87, Satoshi “Fibber” Hirayama is a walking contradiction, his heroics surpassed only by his humility. Hirayama has been raising eyebrows for decades, manifesting magical moments on the diamond and the gridiron that defied his diminutive stature.

On the opening weekend of the college baseball season, Fibber — so dubbed because his Japanese immigrant father struggled to pronounce Hirayama’s birth month, February — learned his jersey No. 3 would be retired later in the season, marking Fresno’s unique role in Japanese-American baseball history.

“I’m speechless,” Hirayama deadpanned, true to form for a man whose athletic exploits always spoke louder than any words, and someone who still remembers what it was like to have no voice and no freedom.

He was two days past his 12th birthday when Executive Order 9066 deemed this bicycle-riding boy from the Tulare County hamlet of Exeter an “enemy alien,” soon sending Hirayama and 120,000 other Americans of Japanese ancestry into internment camps further inland. Locked behind barbed wire in Poston, Arizona, for the next three years, Hirayama was playing a game of dry desert baseball when the atomic bomb devastated Hiroshima on Aug. 6, 1945.

Little did that sun-soaked 15-year-old prisoner know that only a decade later, he would become a critical instrument of diamond diplomacy, greeted by 10,000 people when he arrived in that still-recovering city to launch an all-star career for the Hiroshima Carp.

Baseball wasn’t part of the plan when he initially landed a football scholarship. As Hirayama tells it, his decision to don a baseball uniform for former Bulldogs coach Pete Beiden was based solely on his disdain for spring football practice.

He became the first Bulldog ever to earn first-team all-league honors three times and helped secure Beiden’s first conference championship as a sophomore in 1950. The following year, his play in center field pushed Fresno State to another title with the best record in school history, 36-4. Somehow left out of the NCAA playoffs, the Bulldogs instead capped their season with a trip to Hawaii, where Hirayama’s 360-foot throw to home captured the attention of a local sportswriter. “Other than Joe DiMaggio,” Wallace Hirai wrote, “no player has come through with such a perfect strike from the outfield in the 25-year history of Honolulu Stadium.”

His senior season saw the pint-sized dynamo extend his career record for stolen bases to 71 and propel the Bulldogs to the first of their 34 NCAA Tournament appearances. It would be nearly four decades before Tom Goodwin broke his record for steals, but Hirayama’s mark of five thefts in a single game still stands.

His Major League Baseball dreams were dashed when the Army drafted him away from the St. Louis Browns’ farm system in 1953, and after two years in the military, he joined former Bulldog teammates Harvey and Howie Zenimura in Japan. Hirayama tallied 160 career steals, clubbed 45 home runs, and even delivered a clutch hit off of Hall of Famer Whitey Ford in an exhibition against the New York Yankees.

Wanting to raise their family in the U.S., Hirayama and wife Jean moved back to the Valley, with decades as an educator, coach and baseball scout punctuated by regular returns to Hiroshima.

On April 30, 2017 he stepped between the lines once more at his alma mater.In a stadium named for his onetime teammate Bob Bennett, on a field bearing the name of their Bulldog coach, the accidental all-star had no choice but to let it all sink in. Ten Bulldog legends previously honored were joined by an eleventh name on the press box façade, with “FIBBER” displayed prominently above the retired No. 3.

Seventy-five years after an American-born 12-year-old was branded an “enemy alien” and assigned the number 39621D as he was exiled to an internment camp, that number of shame was replaced with a number of honor.

— Paul Loeffler is the play-by-play voice of the Bulldogs, broadcasting Fresno State baseball, football and basketball on 940 ESPN. 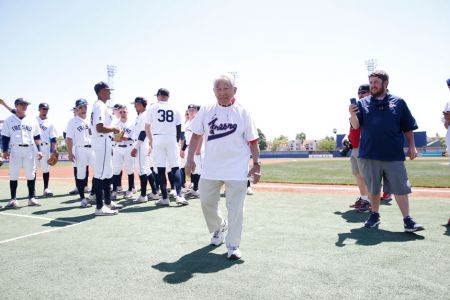 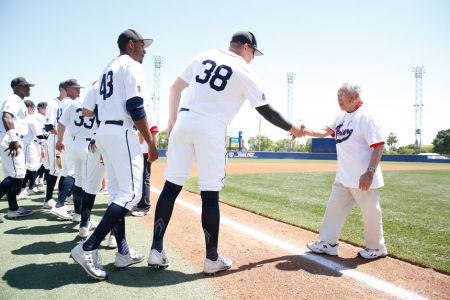 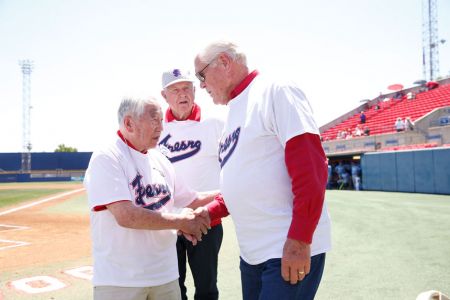 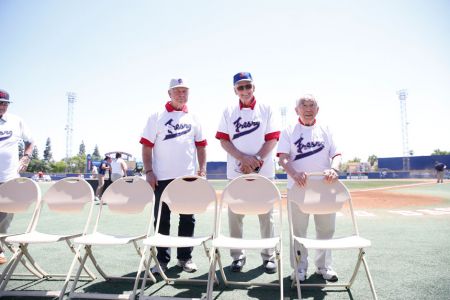 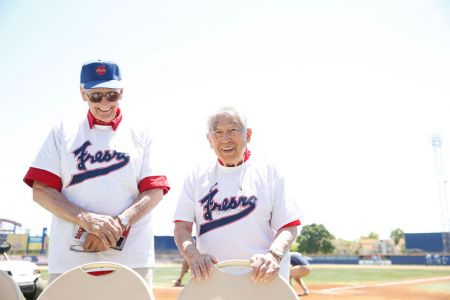 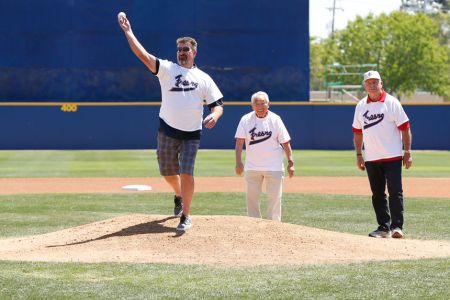 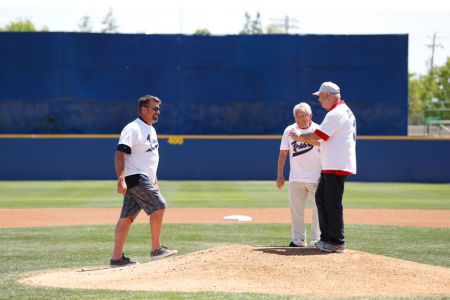 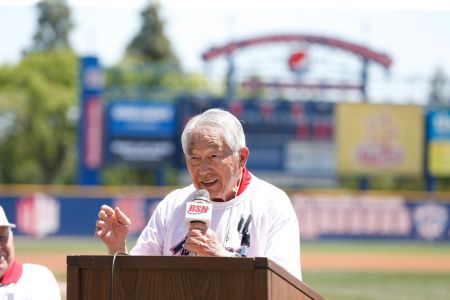 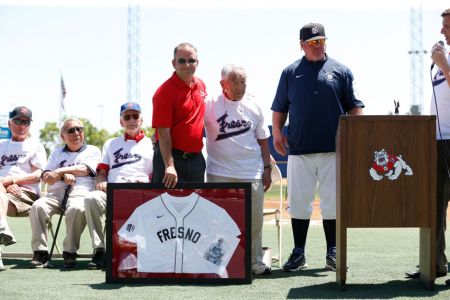 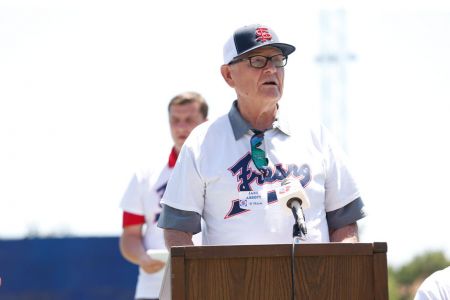 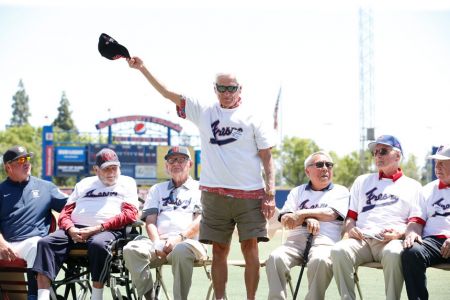 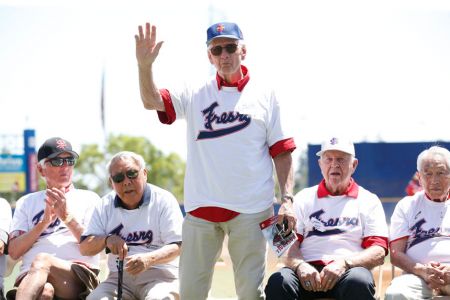 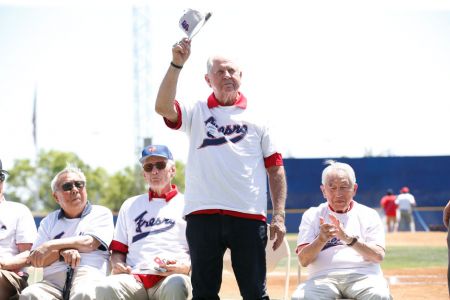 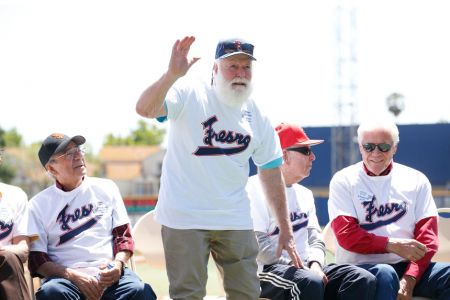 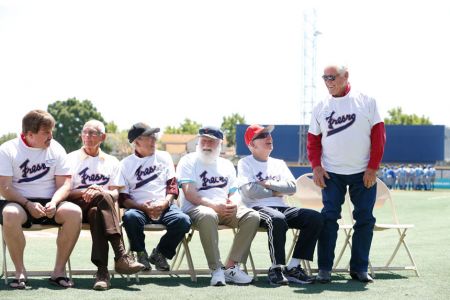 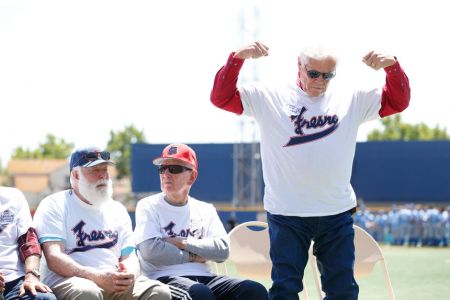